Azra Sayeed is an executive director at Roots for Equity, a proponent of women’s and peasants‘ rights. She also took part in the 11th women’ polical counsel. On the occasion of October 16, the world’s food day, she sent us the following document of the organization “Roots for Equity”: 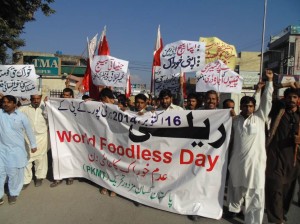 The Pakistan Kissan Mazdoor Tehreek’s Khyber Pakhtunkwa Chapter held its provincial assembly in Haripur, Khyber Pakhtunkwa. The theme was “Apna Beej Ugae Gae, Companiyo ko Bhagaye Gae (We Will Grow Our Own Seeds, and Chase Away Corporations)! No to the Draft Seed Act”.  More than a 100 farmers gathered from various districts to attend the Assembly which had been held on October 16, celebrated by the Food and Agriculture Organization (FAO) as the World Food Day. But for many years, Asian peasants have marked  the day as the World Foodless Day by Asian peasants, and PKMT has also called it the World Hunger Day.

Many of the PKMT leaders including Raja Mujeeb, National Coordinator, Tariq Mahmood, Provincial Coordinator KPK, Provincial Coordinator Punjab Zahoor Joya and Reham Nawaz, District Coordinator Haripur spoke at the assembly. According to them, the world continues to suffer from hunger and malnutrition because of extreme inequities in land distribution and more and more control over agricultural production held by mega transnational corporations.

Raja Mujeeb stated though the world food production was more than adequate, but due to corporate led food production and distribution system, the world in general, and Pakistan in particular is facing rising levels of food insecurity. According to the draft Food and Nutrition Security Act, 60% of households suffer from food insecurity; nearly 13.5 million children suffer from different forms of malnutrition.
According to Zahoor Joya, in a country that was basically agrarian such high levels of hunger were criminal; the government was accountable for the miserable situation of the people.

Tariq Mahmood stated it was important to point out the immense control being given to corporate agriculture was a major reason for rising hunger in the country. The draft national seed act is an indication of the power that transnational corporations hold in the making of the Pakisani agriculture policy. The draft National Seed Act is actually to implement the requirements of the Trade-related Aspects of Intellectual Property Rights (TRIPs) Agreement of the World Trade Organization (WTO). Today, nearly all hybrid and genetically modified seeds are owned by global corporations of which Monsanto, Syngenta, Dow, Dupont, Bayer, and BASF are the most powerful. The tabled seed act would allow only these mega corporations to produce, and sell these seeds in the country. No farmer, unless he/she files for registration would be allowed to grow seeds.

Azra Talat Sayeed, Roots for Equity provided a background on the corporate control over seeds and the development of hybrid, high-yielding seeds and now the introduction of the genetically modified seeds. She provided information on the monopolistic profit seeking agenda of mega corporations and their tightening grip over agricultural production.

Wali Haider, Root for Equity stated that if such a seed law was allowed in the country, it would mean that farmers would be totally dependent on corporations to provide them seed which could at any time result in seed shortage leading to food shortages, hunger and famine.

Hakim Gul a PKMT activist from Sindh, narrated the very difficult situation of peasants under feudalism where massive tracts of land were owned by a handful of feudal lords. Peasants were forced to work on their land using very expensive, chemical intensive agricultural inputs. As a result peasants were living in acute poverty and indebtedness, barely being able to afford two meals a day. All this was because of feudalism and now the increasing corporate control in agriculture. Farmers across Sindh did not have seeds today.  Hakim Gul stressed that point that “we have grown and produced the highest quality of seeds in this region for the past 7,000 years. Why should we the farmers of the Indus Valley Civilization give over the control of our

Fayyaz Ahmed, PKMT member from Hattar provided details of land grabbing that was taking place in his area. He highlighted the role of the parliamentarians in aiding and abetting the various schemes through which land was grabbed. Instead of using land that was not being used for agriculture, prime agriculture land has been taken by force.

In the open forum, Abdul Rasheed a farmer from Mansehra defined sustainable agriculture. He stated that he was keeping his own seeds. He even had his own oxen and refused to be dependent on chemical inputs such as urea and DAP. According to him this was sustainable agriculture. Another landless peasant from Peshawar, Lal Jan stated that “the demands of PKMT were equity and justice; we demand abolishing feudalism and corporate control over our lands. It is a fight for justice. No doubt it will take time but we will meet with success. No matter what our spoken language is, farmers and workers are one, and we are united.”

The Assembly passed the following resolutions:

The Federal Government must immediately stop further action on the Draft Seed Act and take it back;

The control held by transnational corporations on Pakistani Agricultural must be taken back;

An equitable distribution of land must be implemented demolishing feudalism;

The government should provide all support to small and landless farmers so that they have control and access to land, seeds and other productive resources;

Women must have equal space as farmers and small producers and have the same rights as their counterparts;

All decision making with respect to agricultural production and marketing must be in the hands of the small producers, enabling the implementation of food sovereignty;

At the end of the Assembly, the Pakistan Kissan Mazdoor Tehreek and Roots for Equity took out a protest rally.