Dear comrades,
We lost Sevda Çağdaş, delegate of the Middle Eastern Regional Conference for the 2nd World Women’s Conference in September 2014 in Diyarbakir, in the fight against ISIS in Menbic. 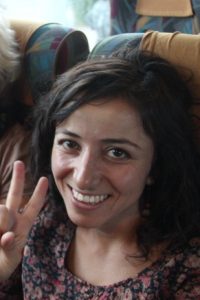 You may remember Sevda. She was of rather small height, had a smiling face and participated the conference as Kurdistan delegate of the Socialist Women’s Councils (SKM). She was reading the SKM report in front of you. She was also the translator for German during the conference. She was studying German Language and Literature at the Dicle University in Diyarbakir.
When we went together to the border of Kobane, she was one of our photographers. When the police stopped her because she was taking photographs and had no press card, our comrade from Lebanon immediately took out her own press card. 6 days after our Middle Eastern Regional Conference Sevda got seriously wounded during clashes in Diyarbakir. She was in treatment for long time. After her recovery she went to Kobane, to the Kurdish and Middle Eastern people’s war for freedom and justice, to a new life, to the homeland of the women’s revolution.

We lost Sevda during the Menbic offensive, in the war against fascist bandits that darken the world. Her struggle and her memory remain inheritance for us. Therefore I wanted to her story with you and all the women of the world. The World Women’s Conference lost one of its activists. With the belief that her efforts will be counted valuable and her memory will be kept alive I send you all my love.
Mukkades Erdoğdu Çelik
Member of the Middle Eastern Conference for the 2nd World Women’s Conference
P.S. I attach you some pictures of that time. We just received the very sad news that we lost Sevda Çağdaş, delegate of the Middle East Regional Conference for the 2nd World Women’s Conference in September 2014 in Diyarba-kir, in the fight against ISIS in Menbic.

Of course, I remember Sevda!

With every fiber, she was a fighter for the liberation of women and an activist in the process of the World Women!

We are very sad. She died in the struggle against the fascist IS. Young women like her are the ones that are building the future of the world with all their strength and courage. Worldwide, they arise in order to fight for a life without exploitation and oppression – she did not stand alone!
Nevertheless, her death leaves a deep void for all her friends, her comrades and her family. My warmest thoughts are with them. We are determined to and will even more carry on with allying the world women.
My deepest sympathy
Monika Gärtner-Engel

World Women in deep sorrow about the death of Sevda Çağdaş