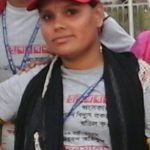 GWTUC’S Statement On The Abduction of It’s Leader Lucky Akhtar In deep anguish and utter disgust, Garment Workers’ Trade Union Centre, with due responsibility, stating that Lucky Akhtar, one of our leader has been unlawfully abducted from her own residence at Gazipur district just approximately an hour ago at 1 am midnight of 16 May 2016 by what we reasonably believe are members of any of the government law enforcement agencies. They used a white microbus to aid the abduction.

We are stating that the motive behind such horrendous act aimed at stopping her from leading the workers of the Vue Fashion Ltd who were protesting against the owners of the said garment factory which the owners shut down without following proper legal procedures such as paying the due wages of the workers. She was supposed to be present at a protest rally on 16 May 2016 at 11 am at Kauran Bazar, Dhaka where blockading the government agency responsible for regulating factories was one of the agendas related to protesting unjust, unlawful and illegal actions of Vue Fashion Ltd and omissions of the said government agency which are aiding and assisting the said garment factory in their deed.

GWTUC is declaring, in resonance with it’s 2 million supporters who are workers in the garment industry, that Lucky Akhtar be freed from the custody of any government law enforcement agency directly and/or indirectly involved in this unlawful abduction and her safe return be ensured unconditionally. GWTUC is extremely concerned about the trend of on-going forced disappearance of members belonging to opposition political parties, trade unions and even those who have a dissenting voice by the government law enforcement agencies. GWTUC has well founded reasons to be afraid and convinced that if she is not freed immediately than she might become the latest victim of such forceful disappearance.

GWTUC is declaring that the pre-planned protest to be held at 11 am on 16 May 2016 at Kauran Bazar to blockade the government agency responsible for regulating factories with the addition of the agenda of protesting the unlawful abduction of Lucky Akhtar and the demand of setting her free unconditionally and at the same time GWTUC demands a judicial commission to investigate such unlawful acts of the responsible government law enforcement agency.

Protest against the abduction of Lucky Akhtar!