On behalf of the European Coordinators for the Worldwomenconference

To the women and girls of India! 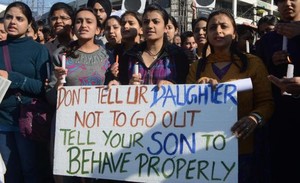 To everyone who the last weeks went out onto the streets in protest against the humiliation of women, against sexual violence and rape!

We, women who take part in the European process of preparation of the 2nd Worldwomen-conference of rank and file-women –  which will take place in Asia in 2016 – share in your grief and burning anger. We admire the courage with which you flout the ban on gathering, the brute use of the baton and teargas by the government state apparatus and the smear campaign of the media.

We empathize with the countless unknown women who have suffered a similar fate and their families. We fully support you and we share your struggle for the respect and dignity of women and their right for self-determination, for tough laws against rapists and especially for their prosecution and punishment.

In Europe it suddenly became known to what unprecedented extent violence against women takes place in India – in a country which is presented here as ‘the world’s largest democracy.’ The ‘Times of India’ writes that millions of women live in a state of constant fear. According to official Indian statistics every 20 minutes a women is being raped. And when you know, which humiliating tests and procedures Indian women have to endure when they report a rape to the police, it is clear that the real figures are much higher.

The old Indian religions and ingrained traditions now collide with the change of India into a developed industrial country with its own imperialist claim. More and more women are qualified workers, programmers, doctors, teachers, etc. and rebel against these chains. They organize themselves in the women’s and workers‘ movements and revolutionary organizations.

They stand together with the women and men:

• in Tunisia, who in bold mass demonstrations protest that women are deprived of the fruits of their struggles in the „Arab Spring“ and are made more lawless;

• in Ireland, the mass protests against the abortion laws;

• in Italy, who demonstrated at the end of 2012, because a priest of the Catholic Church said in an announcement that by their behavior women themselves are to blame for domestic violence and sexual assault;

• in Bangladesh, where the textile workers organized a general strike in December 2012 against the murderous working conditions in the factories;

• who support the women and girls who struggle daily against the subtle forms of oppression of women – against sexist harassment, lower wages and degrading working conditions;

• who with millions of people around the world fight against structural violence against women in every form and for protection.

We see the oppression of the women in the world – and we see how the women of the world are in the forefront of struggles for democracy, freedom, and revolutionary change and the protection of natural resources. We reinforce the process of the Worldwomenconference by organizing connections and mutual support with the perspective of a liberated woman in a liberated society.

On the 26th of January, the European Conference for the preparation of the 2nd Worldwomen-conference of rank and file-women, convenes in Amsterdam. The 2nd Worldwomenconference will be held in Asia in 2016 and the situation and struggles of women in Asia will certainly be an important topic!