The countdown for the 2nd World Women’s Conference of Grass-roots women is on! 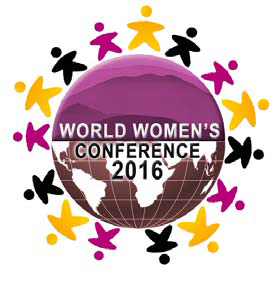 Only few days from now on the 2nd World Women’s Conference of Grass-roots women will begin in Kathmandu/Nepal. From 13th to 18th March women from about 40 countries from all over the world will come together and meet with hundreds or even thousands of Nepalese women. The motto is: Women are climbing the highest mountains. The courage and the tenacity which is necessary for climbing the highest mountains was already much in demand in the preparations – and was especially showed by the Nepalese women of the United Women’s Alliance (UWA).

For four years now, women all over the world have been preparing this important event. But the devastating earthquake in April 2015 and later the unofficial border blockade by the Indian government until few weeks ago left it open, if the conference could take place at all. Originating from the courageous women of the United Women’s Alliance in Nepal, the World women (the women in the World Women’s Conference process) came to the joint decision: Grass-roots women do not let themselves be stopped by any difficulty! Neither the natural disaster of the earthquake nor the political and social catastrophe caused by the Indian government’s tries at blackmail will hinder us from climbing the highest mountains!

In 2011 the 1st World Women’s Conference of Grass-roots women took place in Caracas/ Venezuela. 15 years after the last UN World Women’s Conference it was clear: If the grass-roots women of the world lay their fate into the hands of governments, the UN or NGOs their situation will not get better. Quite to the contrary, low wages and getting even lower wages than men, violence against women, aggressive imperialist wars, conditions that force women to be a refugee, joblessness and poverty are severely affecting particularly women. Double exploitation and oppression of the mass of women is the reality in the capitalist and imperialist world of today!

The World Women’s Conference special profile is the orientation on the real grass-roots women: the working women, the peasant women, the house-maids, the activists of the grass-roots movements; furthermore the principles of working above party lines, of democracy, financial independence, the internationalist thinking, feeling and acting in solidarity. On this basis all women are invited to the 2nd World Women’s Conference with the express exclusion of fascist or other anti-women forces.

The autonomous women’s movements in the world are getting stronger, women workers are becoming strike leaders, women are standing in the front line in struggles for the protection of the natural environment from an imminent global environmental catastrophe, wherever the silence about violence against women is broken and there is resolute opposition against it, and when girls are asking for education and future! Most of all, it is the profit oriented capitalist system, the imperialist drive for power, which are causing all these problems. At the same time the prerequisites for the liberation of woman in liberated societies, for a life without hunger, poverty, joblessness, wars, mass diseases and in unity with nature are today as fully developed as never before in history.

After thousands of years of underestimation and oppression women today are standing in the front line of social movements for democracy, freedom, independence, women’s and human rights, protection of environment and more and more in movements to overcome capitalism and gain a liberated future in socialism.

So in Rojava (North Syria) where the seemingly invincible so called “Islamic State (IS)” was defeated to a decisive degree by the women’s self-defense units (YPJ). And a democratic self-administrated system with far-reaching women’s rights was realized. So in Nepal, where women – after monarchy had been overcome – are standing up for a democratic and independent Nepal.

The decision, to hold the 2nd World Women’s Conference of Grassroot women in Nepal was first taken in 2013 during a meeting of the world coordinators in Johannesburg/South Africa.

All these important experiences will come together in the 2nd World Women’s Conference.

An extensive, exiting and cultured program has been prepared:

The following dayy the program will take place in Nepal Academy Hall, Kamaladi. There, on the second and third day, 14th and 15th March, two-day workshops covering all the fundamental issues of the women of the world are on the agenda. On the fourth and fifth day, 16th and 17th March, the general assembly of the delegates takes center stage: It is the deciding body of the World Women’s Conference and consists of maximum 5 delegates of the militant women’s movement from each country. On the sixth day, 18th March, there will be a joint final plenary of all participants! Every day from 5 to 7 pm there will be cultural events, which are prepared by the continents respectively. One of the further highlights will be an international song contest for finding a hymn of the women of the world. Also there will be a vibrant program with workshops, music, film, stands, food, exhibition, handcraft etc. Everybody is invited to join.

The fee for the whole 6-day program for Nepalese women is 200 Rupies. For the cultural events you can buy tickets.

The big aim of this World Women’s Conference is to sustainably install stable relationships in the international women’s movement for reciprocal information, mutual support and coordination of common struggles. One fist example for instance was the collection of donations after the earthquake in Nepal, when European women collected 23.000 Euros in a short time, which could be handed over directly to the United Women’s Alliance. With this money Magapaua School could be reconstructed. On 6th March a delegation of the World women will go there for a solemn inauguration ceremony. This sheds a very adequate highlight on the militant and solidary international community of the World women.

This spirit of international solidarity, anti-imperialism and great perspectives for the future will be the hallmark of the 2nd World Women’s Conference.