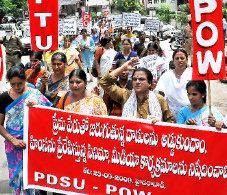 The Progressive Organization of women (POW) strongly opposes the big brotherly attitude of the Indian Govt. towards Nepal. Indian govt. had tried to stop promulgation of the constitution in Nepal and had sent Foreign Secretary to pressurize the Nepal government and political parties. Since promulgation of the Constitution Indian Govt. has openly and blatantly interfered in the internal affairs of the neighboring country by publicly demanding changes in their Constitution. Indian Government has sought to build pressure on the ruling establishment of Nepal by imposing an undeclared blockade of the land locked small neighbor. Hundreds of trucks are stranded at the check posts due to deliberate inaction of Indian authorities. The undeclared blockade has created shortages of fuel, medicines and other essential items.

POW condemns this undeclared blockade and demands that Indian Govt. immediately resume supplies to Nepal. We also strongly condemn the open interference by Indian Govt. in the internal affairs of Nepal. It is not the first time that Indian Govt. has imposed blockade on Nepal. Rajiv Gandhi Govt. had done so in 1989 when the then Nepal Govt. had contracted purchase of some military equipment from China. This blackmail of Nepal is against the friendship of the people of India and Nepal.

These actions of Modi Government have shown that his call for South Asian Regional Cooperation was hypocritical and this Government wants to impose its will on countries of South Asia. Modi’s so called charm offensive and earthquake diplomacy were devoid of respect for Nepal and its people. It appears that RSS-BJP dispensation led by Mr. Modi is cut up with Nepal for their rejection of naming their country a Hindu state and opting for secularism.

POW expresses its solidarity with people of Nepal in their opposition to browbeating by Modi Govt. Brave people of Nepal had displayed exemplary heroism in battling the destruction caused by massive earthquake. They will also stand up to brash, arrogant and domineering attitude of Modi Govt.