I have attached here a poem originally written in Filipino and translated into German by our comrade in Austria. 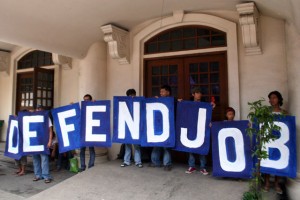 This poem describes the bad situation of poor families in Metro Manila who experienced violent demolition of their homes and livelihood and neglect of the government. Defend Job Philippines is now documenting these situation and helps in exposing this situation to the community. We are one of the complainant who filed a case to the United Nations. Hope, you can also support this complaint. Please help us in sharing and spreading this poem to our comrades and friends in Germany.

Here are some information about the poem:

Carreon, is a worker and organizer of Overseas Filipino Workers in Saudi Arabia in 1984. Now, he lives in Vienna Austria with his family and continue to fight for the rights and welfare of migrants and advocates for the liberation of his homeland—Philippines. He is the Chairman of

A poor dwelling of fishermen and their families. For more than 10 years, they experienced violent eviction of their homes from one place to another. The government did not give them any program to uplift their lives. Now, these families along with more than 10000 people depending their livelihoods and migratory birds in the sea face threat of destruction of lives and livelihood as the government will reclaim more than 640 hectares in the Island. Tens of thousands of people resist against the reclamation because it will cause widespread flood all

Translator: The poem was translated by a Comrade from Migrante Austria. A mother of two children and active leader of Migrante.