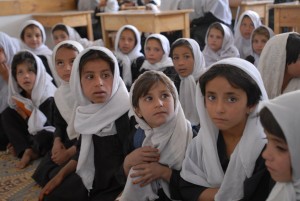 By The Left Democratic Women of Afghanistan, from Europe.

Dear delegates of the second World Conference on Women,

We the Left Democratic Women of Afghanistan from Europe, who have already been fighting for 50 years to get rid of the oppression of Afghan women from double exploitation, namely patriarchal and fundamentalist order, want to send our warm greetings to you. Currently, women in Afghanistan are facing a war, which capitalist countries, especially the USA are waging against our country. They have created two dark forces: the fundamentalist Taliban and ISIS, which have been imposed on the people. The bloody events of recent years, i.e. forced marriages of underaged girls, stoning, burning, beheading, ears and nose cutting, removement of women’s reproductive organs by husbands, are evidence that the women of Afghanistan are in a state dominated by patriarchal fundamentalists in a very insecure environment. Despite the presence of international forces, and human rights organizations, the plight of women of Afghanistan is getting even worse. For example, the UNAMA newsletter in March 8th of this year reported that violence against women in 2015 has grown by 37 percent.

Because of these acts of violence and other factors, such as war, unemployment and insecurity in the country, women are the most vulnerable part of the population. Our women are escaping with their children and moving in big waves to come to Europe.

Unfortunately, while on their flight to Europe a great number of our women not only become victims of sexuall harassment by human traffickers, but they also drown in the sea along with their children in great numbers.

The Left Democratic Women’s struggle for freedom, both inside and outside Afghanistan, and against social injustice and imperialism and fundamentalism will continue.

All of you participants of this conference, with your great ideal to fight for the global women’s movement in its struggle for gender equality and emancipation, from the shackles of oppression we wish you big achievements on your every step in this joint struggle.

We regret that our representative Mrs. Amilia Spartak could not attend the conference due to personal reasons. Please accept our appoligies in this regard.

Regardless of where we are in the world, our empathy and efforts to achieve common goals will continue.

Long live the freedom of oppressed women in the world!