we European coordinators of the World Women’s Conference of Grassroots Women follow with great respect the development of the workers’, peasants’ and women’s struggles in India.
The new laws, the so-called “agrarian reform” mean the death of many small farmers. Therefore we are happy about the great success of the struggle that these laws have been suspended for the time being. An important reason for this was that the women’s movement, together with the workers and the revolutionaries of the country, declared solidarity with the peasants and carried out great mass activities.
We understand the news to mean that the Modi government is striving to give Indian corporations an edge in the international competition. Therefore, the government is dismantling the “hurdles” of profit maximization in the country. Wide sections of Indian society are affected and these attacks by the Modi government are also worsening the situation ofwomen and families.
It is an important signal for the international militant women’s movement and an expression of the growing women’s consciousness that in all these struggles women farmers, housewives, grandmothers, students, teachers up to nurses are in the front line and form the backbone of the protests. We read that in Delhi’s outskirts of Tikri, more than 2000 women are camping
there and carrying the protest. But it is not only in the capital that they are taking on important tasks, without which a sustained protest would not be possible: they are providing thousands of demonstrators with food and water and preparing beds for them to sleep in.
The masses of people fighting for their social and political rights in India have all our solidarity. We wish them full success !
Please convey our solidary and militant greetings from Europe to the struggling people!
Susanne Bader
Halinka Augustin
Zaman Masudi 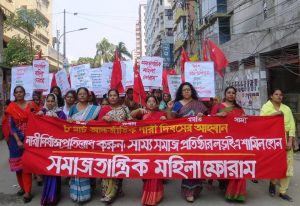 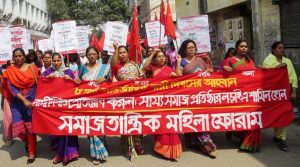 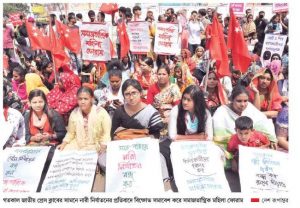 Please keep us informed about your activities, analysis and keep in touch.

we are looking forward to this international gathering of women in India! It is a historic meeting – women of the world discuss together the theory of the liberation of women!
Meanwhile we have received calls from all over India from women who want to participate in the seminar. That is very exciting! We also receive registrations from other continents! Welcome to Bangalore!

Staying overnight in a mass accommodation:
The rented meeting room offers common sleeping facilities for about 200-250 women, including 4 rooms, 2 dormitories and halls in which they provide mattresses for sleeping.
Staying overnight in a hotel – you have to rent them yourself.
Catering:
Those who stay overnight in the Massenquartier will get a breakfast there. If you stay overnight in a hotel, you will have breakfast there. There is tea and snacks as well as lunch for all. Dinner can be served to everyone in the meeting room if needed, but we thought people would prefer to eat outdoors at a time of their choosing.
Advertising. We print 10,000:
We are printing 10,000 posters to be hung all over India.
We are currently calculating the cost of participation and sending it to the homepage!

Our world woman Sharmistha and her fellow campaigners are free again!

We have just received this wonderful news from India:

“We thank you for the message of solidarity with Sharmistha. We are pleased to inform you that Sharmistha and the others who were abducted with her were released the same evening after a massive protest by the people.”

And further they write that the situation is very tense but Sharmistha and other activists are in a safe place.

“(…) We thank you again for your support and promise you that the fight will continue.”

We, the workers of „Fortuna” Gračanica shoe factory and participants of European world womens conference of grasrootswoman, strongly condemn the brutal attack and abduction of activist Sharmista Choudhury and other leaders of the Bhangor-Movement!

As woman, workers and fighters for worker rights in Bosnia and Herzegowina we were also victims of physical and psychic attacks and it is our obligation to the society and to the world to stand up against such attacks on individuals and activist groups.
We demand for immediate and unharmed release of Sharmista and other activists!

The workers of “Fortuna ” Gračanica Shoe Factory / Bosnia and Herzegowina

We fear that life of our sister Sharmistha and other leaders of Bhangor Movement are under threat.

We; as Free Women’s Movement (TJA) strongly condemn the brutal attack and abduction of Sharmistha and other comrades. We demand immediate release and call on the government to take action against these criminal activities.

END_OF_DOCUMENT_TOKEN_TO_BE_REPLACED

With absolute horror and great anger we learned about Sharmista’s kidnapping and other guides last night. We know Sharmista as a combative and very committed woman.
Her struggle for the environmental and popular movement “For land, livelihoods, ecology and environmental protection” is obviously also the reason for the cowardly attack on her and that she was attacked and abducted by thugs of the ruling party TMC.