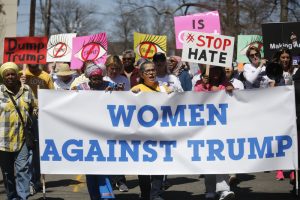 Congratulations to the American women for their powerful, self-confident and meaningful march on the capital against the new president Donald Trump, his cabinet and his policy.

With around 1 million participants you made history!

As European Coordinators in the Worldwomen’s process we are sending our militant greetings from continent to continent to all activists of the Women’s March on Washington!

This mighty mass demonstration united women of all ages, strata, professions and nationalities across the whole country! Women stood up on a massive scale!

Often they took on long and tiring journeys to speak with a united voice:

A mass demonstration of pink “pussyhats” gave president Donald Trump his well-earned reception. The arch reactionary Donald Trump stands for a racist, anti- women and -migrant, anti-Muslim, anti-workers and anti-environment policy, which masses of women have raised their voices against.

Donald Trump’s attitude and remarks on women express a deep discrimination of women. His policy wants to send women back to the kitchen, compelling them to bear children. But women see that differently: “A woman’s place is in the revolution”. He regards women as sex objects, the women’s response: “pussy grabs back“.  Against the impending aggravation of exploitation of working people: No attack on minimum wages“, „Hands off union rights“. Signs against racial discrimination, the discrimination of disabled people and homosexuals. against climate sceptics and for the environment: “Respect Mother earth“ „Climate change is real“. For democratic rights and freedom. We have to fight again for rights, we once had successfully fought for“. And: „The people united will never be defeated.“ Thousands of self-made posters with imaginative demands express a self-confident atmosphere of departure among the masses of women in America. Also men joined the protests.

The solidarity stretched far beyond the American continent and also in Europe women took to the streets. For example in London, Vienna, Berlin, Frankfurt, Hamburg, Munich, Heidelberg, Stockholm, Copenhagen, Helsinki, Paris, Prague, Amsterdam, The Hague, Madrid, Rome, Geneva and on all other continents! There were around 670 demonstrations against an increasing reactionary, right-wing oriented and proto-fascist policy and governments.

In crafting and sending pussyhats women from different continents expressed their solidarity and support. The movement in the United States was mainly organized via the social networks: “Why I march” circulated the manifold reasons of mainly young women. This women’s march was a merging of the experience and protest forms of the international women’s movement.

This all underlines, the time has come for an awakening of women worldwide!

Angela Davis, representative and fighter of the Black Panther Movement announced a message and promised: 4 years Trump will be 1,459 days of resistance!

By that the women of the Women’s March have made a courageous landmark decision and taken on a lot of work. So they need courage, power, clarity and perseverance. Experience has shown, wherever the women’s movement gets active in fighting for their rights, emancipation and liberation, it has to be well organized and needs allies.

No protest, no fight may be alone and isolated! That is the message from the worldwomen’s movement we have been building up for the last 10 years to coordinate our demands and struggles for mutual benefit.

As coordinators of the European continent we call upon the women in America:

Join us in the process and movement of worldwomen in organizing the World Women’s Conference of grassroots women! Welcome in the ranks of worldwomen!

The most important task we have in all continents is to strengthen the militant women’s movement in our countries, to develop it into a great power that also serves as a link of different social movements. We can only achieve that being organized independently across party lines.

With the best wishes from Europe,