Delegation of the 2. World Women´s Conference of Grassroots Women to Diyarbakır

We, the official delegation of the 2. World Women´s Conference of Grassroots Women to 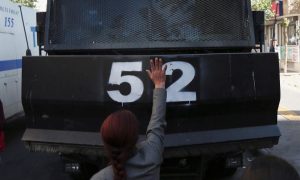 northern Kurdistan, demand the immediate release of the imprisoned members of municipalities and the reinstallation of all dismissed co-mayors. The women and men are democratically elected representatives of the people.

The sequestration of towns and municipalities is another step further in direction to a fascistic dictatorship. The european and the american government may watch no longer, how the turkish government accelarates its power attempts and thereby subjects ethnic groups and denominations like the Kurds, Alawites and Yasidis repeated times to unwarranted pursuit with poor excuses and aim to suppress or even to extinguish them.

The turkish government tried already before the failed coup in july 2016 and the following state of emergency to eliminate advanced democratic forces in Turkey and neighbouring countries (e.g. in the district of Rojava, northern Irak), has – even with support of the german and american governments – left the rool of laws far behind and agitates uninhibitedly despotic. It does not only exercise its aspiration to power in northern Kurdistan but together and bluntly with IS in Syria, Iran and Irak. We german people know from our own sorrowful history where all this is leading to and therefore we´ve got a special responsibility to stop this attack on democracy and personal freedom.

We request the german, but also all european and the american government to stop the support of the turkish government, to move back all troops from the affected regions and to issue a ban on deliveries of arms to the turkish state, the IS and to all supporters (e.g. Saudi Arabia).

After the arrest of the co-mayors of Diyarbakır on October, 25th it came to more apprehensions of members of democratic organisations. They demanded the release of the arrested and the reinstallation into their offices within demonstrations in front of the municipality building. First row stood women like the co-speaker of KJA and former member of the turkish parliament, Ayla Akat Ata. She was battered and than arrested. Neither her lawyer nor her family is permitted to visite her the first 5 days. At the same time more women of the KJA (the umbrella organization of the Kurdistan women) were barreled and arrested too. Their houses were raided and all documents, archives and computers were seized illegal.

This shows clearly that the main attack from the turkish government points against women. Womens rights in Turkey get restricted more and more since years now and even the dismissals inside kurdish municipalities affect often the female co-mayors. The arrest of the attendees of the demonstration is another step away from a democratic state system.

From conversations we carried on throughout and after our journey with affected persons we got to know that arrested persons in Turkey get tortured regularly. Particularly the women are concerned again, because they not only are tortured but also raped in prison. Torture offends against the human right on personal intactness and is another reason to point the turkish government back into its barriers.

We demand all democratic governments – especially the german and american government – to stop the attack on liberally democratic fundamental rights from the turkish government and especially on the rights of women immediately and to finally stop the cooperation with this dictatorial regime!

Freedom for Kurdistan and for all suppressed people of this world!

The board of the Womens Association Courage joins  the protest and will spread it in every possible way.