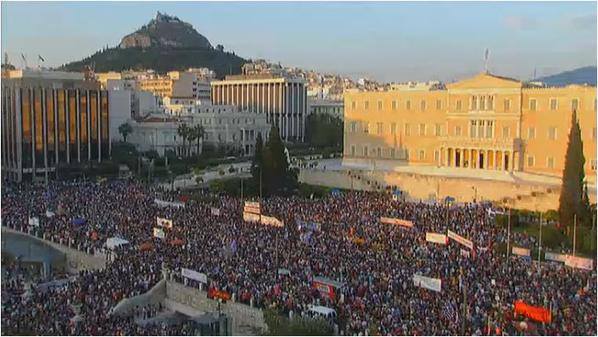 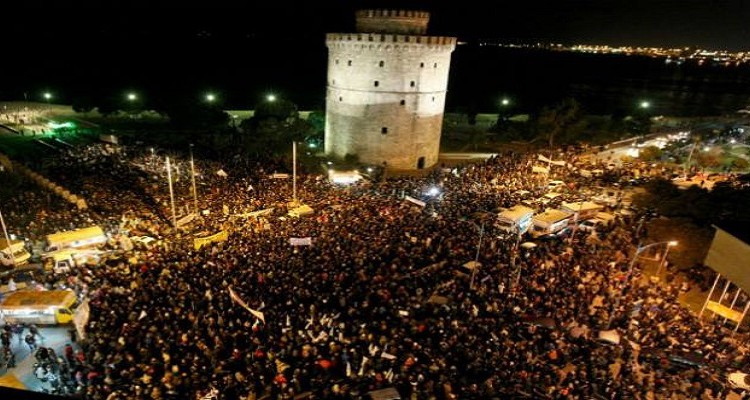 In recent weeks we are seeing in progress a “financial coup” in Greece by the EU, ECB and IMF . Especially after the decision of the Greek government to move to a referendum asking the Greek people to vote “NO” or “YES” in the agreement proposed by the troika. Due to this decision the past few days we receive a hard, barbaric and non-negotiable attitudes of capital and EU who believe that they can behave and to order as colonizers (read the declarations of Juncker, Schäuble, Merkel etc). They organized this terrorist attack using of their “servants / guardians’ – the local capital, the dominant economic classes and the media (banks closed, limiting the cash withdrawals in the amount of EUR 60 daily, has started defaulting employer to their employees under the pretext of the referendum, intimidation of people constantly of the private media, organizing counter-demonstrations etc). It’s like a class war.

END_OF_DOCUMENT_TOKEN_TO_BE_REPLACED

Here are my answers to your questions:

Our readers are very interested in the mood of the people in Greece. What is your opinion on the blackmailing by the EU?

1-Greek people realize the blackmail by the Troika and Eurozone leaders, who play an unfair game, believing that  by creating economic  asphyxia among  greek society, the government will collapse.

We should , also, underline their cooperation with the opposition parties ,as they would like to accelerate the end of “the left intermezzo” in Greece!

They  provoked the closure of banks, by stopping currency by the ECB,leading to capital control, fact that makes some people (mostly pensionners  ) to feel insecure due to lack of cash.

In one hand they realize the purpose of such blackmail and are supportive to the government, in the other hand they worry about the “day after”.

They  feel anger rather than  fear for the future.

END_OF_DOCUMENT_TOKEN_TO_BE_REPLACED

Μost people here in Greece, consider the referendum an act of resistance to the lenders. No interest the real question but the act of the referendum. After five years of tough austerity they all know now, that the EU is wrong created. They want to stay in the EU but to change Europe.They want to have jobs and the country to become productive. They can not understand that there is not production because we are in the EU. Just their request  to change something that is structured from the beginning against the people and in favor of capital.However, in the minds of citizens, the EU-IMF-ECB is loan sharks, which with the help of the older governments oppress our democracy.My opinion is that there must be a break with the EU and the people to decide freely and without restriction to their  fate. Be able to choose freely and to produce what has need.They blackmailed by the EU-IMF-ECB and the media scares us but I think that comes the beginning of the end for all of them.

Practically nothing has changed. The working conditions, the sector of health, education, nutrition is the same. The government tried to measures taken for the humanitarian crisis to help but unfortunately very few citizens are entering these programs. There are no jobs and where can be found, is in slavery conditions. Without eight hours with very little wages and uncertainty about whether there is work for the next day.

We try with meetings, mobilizations and events to inform citizens about the real cause of all who live. We participate in kinematic actions (demonstrations, lectures, festivals, etc.), so as to demonstrate in practice that the fight never wasted, only that which is not given.

Answer from Shiela: Dear European coordinatiors, I express my heartfelt gratitude, on behalf of Nepalese masses. Your effort of solidarity definitely strengths the will power of women in the process of world women conference, to help the needy people who are ignored by the state. For sure once the situation gets stable we will give  the report. Though I am unable to build contact with other coordinators in Nepal, but I hope they are physically uninjured. Once more I would like to extend my thanks for your valueable contribution at very vulnerable situation, and hope for the same in future. In struggle, Shiela. ****       European Coordinators Monika, Halinka, Angélica, Maria 21-05-2015 To the Coordinators in Nepal CC to all World Coordinators Dear Durga, Sarita and Shiela, we are tremendously happy that we can transfer 20.020,22 €uro from Germany, the

Netherlands and France. What is special about these funds is, that they mainly come from many small-scale and micro donations. About 10,000 discussions were held for it, the women mainly collected on May Day also among workers. This included speaking about the World Women’s Conference and the important union of the 8 women’s organisations in Nepal. We emphasised that the 8 women’s organisations are not dependent on cooperation with the government, like the international charitiy organisations are, but have deep roots among the masses of the women. The women are of course curious to get to know at a later time how the money was used. Whenever you will have a clear head again to write about this, we are happy to get a report. But of course there is no hurry! END_OF_DOCUMENT_TOKEN_TO_BE_REPLACED 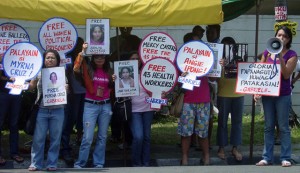 END_OF_DOCUMENT_TOKEN_TO_BE_REPLACED

Women gathered in South Africa for the 2nd coordinators meeting preparing the 2nd World Women’s Conference 2016 want to express their solidarity with our comrade Mary Zamora, former UNE’s president (Union of Ecuadorian Educators) for her unjust and anti-democratic conviction of 8 years of prison due to the persecution of president Correa’s government to the real popular fighters.

2. Resolution on South African Mine Strikes

291.865 employees of mine industries in South Africa, Anglo-America Platinum, Kumba Iron Ore and Anglo-Ashanti, in strikes 40 workers were killed and 78 injured last year. That is ongoing strikes, demanding their wage increase and better conditions of work in all mine sectors. As women we express our solidarity with South African Workers.

END_OF_DOCUMENT_TOKEN_TO_BE_REPLACED

In commemoration of the Filipino-American War

Increased US military presence to boost prostitution and sex trafficking of

presence in the Philippines and the Asia Pacific region under “America’s Pacific Century” project. This renewed

acquisition of more facilities and access for military exercises, rapid deployment of forces and expansion of

presence will increase prostitution and sex trafficking of Filipinas within and outside the Philippine borders.”

She added that, “Already Filipinas along with Russian women comprise the majority of foreign “entertainers”

working in so-called juicy bars near the US bases in South Korea. Many Filipinas likewise work as “singers”

and “dancers” in entertainment bars around the US bases in Okinawa and mainland Japan.”

IWA noted that where there is US military presence, there is proliferation of the rest and recreation industry