We are women, we are strong! 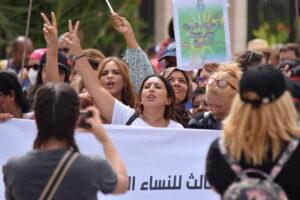 Finally! The 3rd World Women’s Conference of Grassroots Women took place in Tunis/Tunisia from September 3 to 9, 2022, in solidarity, with a hunger for knowledge, eager for debate, self-confident and confident of victory. With a militant demonstration attracting much media attention, a festive opening ceremony, 31 workshops, a general assembly rich in content, inspiring cultural evenings and a joint closing plenary, it inspired minds and emotions under the motto “We are women, we are strong.” The conference with 450 participants, 93 delegates from 42 countries was fought for in tireless work by the warm hosts of the women’s committee Latifah Tamallah, together with the Tunisian preparatory committee including about 10 organizations: women’s and human rights organizations, trade unions, rural women, as well as the coordinators of the world women and countless activists around the world. All this in the headwind of a world whose ruling systems can exist only in crises: economic crises, political crises, environmental crises, food crises, crisis of bourgeois refugee policy, health crises, debt crises… Many regions of the world have already been shaken by wars in the last decades. The war in Ukraine bears as a new quality the danger of a 3rd world war, a nuclear catastrophe through a war which is unjust on both sides. We witness a global environmental crisis which is developing into a catastrophe and destroying our existence.

Both show relentlessly: imperialism leads to war and destroys our foundations of life. The USA continues to be the main warmonger. In their competitive struggle NATO and all imperialist powers go over dead bodies. Bourgeois manipulation of opinion uses the Ukraine war to divert attention from other focal points.

We, on the other hand, see the connection: The occupation of Palestine by Zionist Israel in defiance of international law. Turkey’s brutal aggression against Rojava and 10 years of “women’s revolution”. The terror of religious fanatics, jihadists, the Taliban against the masses in Afghanistan. The trampling upon the right of self-determination of the people of the Western Sahara. The particular neo-colonial exploitation of Africa.

For the women of the world, this all means immeasurable suffering, humiliation, pain: We hear of femicide, sexual violence, genital mutilation, child marriages, nipples cut off as trophies, bellies of pregnant women cut open alive, whippings, dead babies of refugee families washed up on beaches, machismo, sexism, forced prostitution – including of children, oppression and murder of LGBT+, women who died because abortion was denied, mass rape as an ordered, targeted and rewarded weapon of war, low wages, persistent blatant wage differences compared to men, mass unemployment, poverty in old age, horrendous inflation, drought and floods, imprisonment, terror and torture against women resistance fighters and revolutionary women. We heard how a woman peasant lives and protests against the destruction of her living space, Mother Earth. All of this by no means only in the so-called “backward regions of the world”, but also in the midst of the so-called “rich, advanced countries” – precisely under imperialist rule! These are the faces of double and triple exploitation and oppression of the masses of women, of sexualized violence, with all of its disgusting faces, by the greatest patriarchic perpetrators of violence: the state and family system of the feudal, capitalist and imperialist countries. We therefore demand that all imperialists withdraw from our countries. NATO – get out of our countries.

In the entire world women fight against environmental crimes. We work together with all forces which want to save our Mother Earth.

The women workers and peasants, the indigenous women, environmentalists, human rights activists and the young women of the world are opposing all of this courageously: as individuals, in initiatives, movements, women’s organizations, trade unions, parties, through courageous exposures and documentations of crime, through court cases conducted at the risk of their own lives, through strikes, through organizing underground schools, in mass movements up to and including uprisings. More and more often, revolutionary situations arise in which the masses no longer want to live in the old way and the rulers can no longer rule in the old way. Because today all people could have work, bread, health and education! This is only possible without capitalism, imperialism and patriarchy.

But let us not deceive ourselves: no uprising, no revolution can be sustainable if not steadfast, anchored, conscious people who are prepared for everything are organized in mass movements, mass organizations and parties and work together in full confidence. Only together with the international working class will the force emerge that is superior to imperialism, that is unsurmountable with its clarity, revolutionary perspectives and worldwide connections. The new society of the liberation of women and all of humanity will triumph against all bitter opposition.

The preliminary battles for this are fought in the minds and hearts of the people. The destructive, demoralizing and divisive ideas of the rulers must lose their power: fascism, machismo, sexism, colonialism, racism, nationalism, chauvinism, opportunism, anti-communism, post-modernism, Zionism, politically misused religions and related modes of thinking and behavior.

As a movement of world women we are making a determined contribution. Each one of us takes over responsibility for our ambitious program until the 4th World Women’s Conference in 2027: Daily awareness-raising and organizing work for the broadest women’s mass movement from religion to revolution. Strong worldwide days of struggle on March 8, May Day and November 25, with calls of the World Women’s Conference, and we mobilize for World Peace Day. On these days of struggle we want to fight together as world women against worldwide crises and wars. March 8 must become a holiday. When the time is ripe – women’s strike!

Two continental conferences on every continent. In 2024/25 the second theoretical seminar: “Women’s revolution – social-ecological transformation – socialist revolution: how can we conquer imperialism?” We strengthen the coordinators of the world women, elect four coordinators on every continent in future and include young world women in a binding way. They work closely together, but two coordinators each concentrate on continental coordination and two on worldwide coordination. We make an urgent call to organizations, parties and movements: Give them more resources and support! Promote the change of generations. Let us found continental young women’s committees. One young woman from each country takes part in the committee. We form a permanent organization committee so that we never wear ourselves out with disorganization.

We warmly invite you: participate in the platform of world women in the anti-imperialist and anti-fascist united front or in new revolutionary amalgamations. In our organizations and movements we all promote education, self-confidence and that women and girls take over leading functions. We reach out and join hands with all alliance partners.

Women and girls of the world – our time has come!