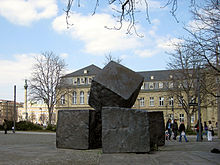 Today on 25 November, the worldwide Day Against Violence Against Women, we have gathered here in Stuttgart at the Memorial Against Fascism and War. This  Day Against Violence Against Women is a cornerstone of joint action of the World Women’s Conference of grassroots women and is being observed in many countries worldwide. The 2nd World Women’s Conference is planned to be taking place next March in Nepal, also because the women’s movement has played an important political role in Nepal.

Momentarily, shortly before the World Women’s Conference in Nepal, the contradictions in the world are further intensifying. We in Germany hear about or are affected by wars of aggression and the threat of war; anti-feminist, racist and fascist ideologies and brutal destruction and terror; the obstruction of progressive movements, as well as attacks upon them; the massive flight from Syria and other countries. Now the conducting of the World Women’s Conference in Nepal is also endangered.

In Nepal on 20 September 2015, after prolonged efforts, a new democratic constitution was adopted. Women were also granted far-going rights. However, since this day the Indian government has been conducting an inhumane supply blockade against Nepal. This affects the country even more severely because the big earthquakes in this spring cost the lives of more than 9000 people and this has not yet been overcome. Most hotels and schools have been closed, public transportation is at a standstill. In this country with extreme temperatures there is no gas for most of the households and almost no medicine for the ill. This blockade hits the entire Nepalese population. But it also means violence against women: women are especially affected, because they are responsible for the practical survival of the entire family.

Therefore we women and men from Stuttgart, from different organizations and individuals, who have gathered here on the Day Against Violence Against Women firmly call upon your government to end the supply blockade against Nepal immediately! We request that you pass on this demand to your government without delay!

Adopted unanimously on 25 November 2015 at the Monument Against Fascism and War in Stuttgart at a public gathering on the occasion of the Day Against Violence Against Women.

Elsbeth Sureau, Solidarität International, on behalf of the rally in Stuttgarter on  25 November 2015

Women in Stuttgart/Germany protest to Indian Embassy in Nepal