Dear Emily!
Very interesting, thank you!
And many many greetings and congratulations for the release of Sharon Cabusao! Really good news!!
Can we publish your statement “Why a ‘rape joke’ is no joke”? Very good and helpful 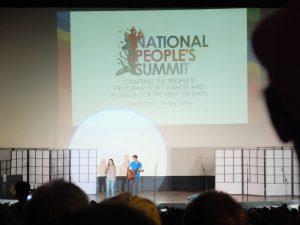 GABRIELA really encouraged women to take part in the summit to create a platform for change to be presented to the incoming administration for review and implementation. The Women’s Summit was a success. Women representatives from different sectors and various organizations gathered in Davao City. The discussions and workshops during the summit revolved around the key women’s demands summed up in the word “CHANGE”. It stands for (C) Comprehensive social services; (H) human rights, peace and social justice; (A) Anti-discrimination and violence against women (N) National sovereignty; (G) Genuine land reform and national industrialization and; (E) Environmental protection after President-elect Duterte has issued several statements that signify the changes that his administration is set to implement. Duterte administration also talked about key reforms in governance such eliminating contractual employment and the resumption of peace negotiations gaining much support from women as these will help bridge the difference and make significant changes that Filipino women want. After six years of neglect and poverty, low wages, unemployment and violence women are hungry for change.

>
> Regarding the campaign for the third seat of Gabriela Women’s party in the Philippine Congress, the Commission on Election still has to decide on the matter. I have another good news which I forgot to include in my last e-mail as I was focussed on the |WWC work. The good news is Sharon Cabusao is already free. She was released last June 15. The court dismissed the trumped up charges against her. She is now busy campaigning for the release of all political prisoners. The impending release of political prisoners involved in the peace talks will build confidence between the Philippine government and the National Democratic Front and will ensure that the peace negotiations will push through.
>

> Appended is the statement that will tell you how Gabriela positioned itself to President elect Rodrigo Duterte on the Rape comment. This happened before the elections and all this current alliances. We value the alliance with Duterte but we will not keep mum and we will make sure he hears what we have to say when he is wrong.
> ——————————————————————————

> Mayor Rodrigo Duterte’s rape joke that reeked of insensitivity and machismo elicited much anger and outrage from the general public. And while an apology has already followed, it cannot be denied that Duterte’s remarks in relation to the gang rape of Australian missionary Jaqueline Hamill in 1989 opened wounds of abuse. His statements are a clear manifestation of the culture of machismo that perpetuate violence against women.

> But more than on the “rape joke”, such anger and outrage must be directed towards the culture of impunity on violence against women. Such culture of impunity is responsible for the discrimination suffered by women and push them to further vulnerability to different form of sexual abuses. It is this impunity that is responsible for the promotion and tolerance to rape culture.

> Under the Aquino administration, in the past six years alone, rape cases increased by 92% while cases of domestic violence increased by 219% and sexual harassment by 136%. More than a hundred cases of women victims of violence involving persons in authority including elements of police and the military sought our help from 2010 -2015. It does not help that justice remains slow and the judicial system, unfriendly to women.

> Under the Aquino government’s counter insurgency program, Oplan Bayanihan, patterned after the US-Counter Insurgency Guide, winning the hearts and minds of the people included courting women, harassing and even abusing them in their communities.

> It is also under the Aquino administration that the Enhanced Defense Cooperation Agreement was signed and thus, opened the Philippines as a playground for US troops and made Filipino women and girls as the GI’s toys that they can play with anytime during their rest and recreation.
>
> Such culture of impunity encouraged by the Aquino government is also responsible for the discrimination suffered by the LGBT community. Such impunity killed Jennifer Laude.

> The Daang Matuwid government perpetuated rape and other forms of violence against women by pushing for economic policies that further throw women and their families deeper into poverty that breeds such violence. In fact, statistics show that regions that have the highest cases of abuse are the same ones that lead in the poverty index and are those prone to disasters and calamities.

> Aquino is ultimately responsible for this impunity and such impunity will definitely continue if we allow the heir of the Daang Matuwid to succeed in this election. This must serve as a challenge to other presidential candidates to end this by promoting platforms that will ensure programs and policies that will address poverty and violence against women. ###

> GABRIELA is a grassroots-based alliance of more than 200 organizations, institutions, desks and programs based in communities, workplaces and schools throughout all regions and major provinces and cities in the Philippines. It is different and distinct from Gabriela Women’s Party, a partylist organization that serves as the voice of women in Congress. The two organizations have their own set of Constitution and By-Laws, organizational structure, officers, staff and headquarters.

Gabriela Philippines: Press release Why a rape joke is no joke!