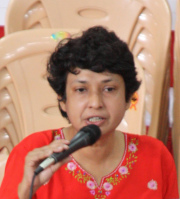 It’s lovely to hear from you.

We are reading about the second wave of coronavirus in Europe in newspapers here and are full of apprehension. I also read that France and Germany have opted for another month-long lockdown. My best wishes to all of you and solidarity to all comrades fighting against the callousness of governments in effectively dealing with this pandemic. Meanwhile, the general news from Chile and Bolivia is encouraging in these bleak times. The women’s protest in Poland against anti-abortion legislation is also inspiring.

The situation in India is grim. The Hindu rightwing, fascist central government has intensified its attacks on the people. The economy has crashed. Joblessness and poverty are on the rise. India is 94 out of 107 countries on the Global Hunger Index, which shows how pathetic the situation is. On the other hand, Indian billionaires are getting richer and occupying top positions on the list of richest people in the world.

Unfortunately, the Indian Left has simply not been able to get its act together. A large section of the liberals is shouting that Covid is a hoax (like Trump) and there is no need of any special measures. Since the lockdown has increased joblessness and poverty, the common people are now having to make the choice between death by Covid and death by hunger. The government is using the misery of the people as an excuse to lift all restrictions, leading to a possible steep spike in Covid cases very soon. The Parliamentary Opposition simply refuses to raise and struggle for the demand that the government should shoulder economic responsibility and ensure that every needy family gets cash allowance from the government during the pandemic.

The fascist government is going full speed ahead with its agenda of converting India from a secular country into a Hindu nation. It is upholding Islamophobia and the recent incidents in France have given a filip to this. Voices of dissent are being ruthlessly crushed. Anyone criticising the government is being labelled as anti-national and put into prison.

Attacks on women are on the rise. The fascists are trying to seize all hard won women’s rights and champion the philosophy of Hindutva which relegates the status of woman to that of a slave to man. Dalit ((in the traditional Hindu caste system, a Dalit is a member of the lowest caste) women are being attacked and raped by so-called upper caste men. Those who protest against this are victimised by the government. In the incident of the rape and murder of a young girl in Hathras of Uttar Pradesh province, even a journalist going to report the incident was arrested and charged with anti-terrorist laws. The government did everything to pretend that no rape happened and a senior doctor in the hospital where the girl was first admitted before she died was dismissed from his job because he had publicly said that the girl had indeed been raped. Many more such incidents have occurred since then.

AIRWO is protesting against this state of affairs in the different provinces where it has strength. But the pandemic-related reality is not conducive to protests of the magnitude demanded by the situation.

I think I have written rather a long reply! I hope I do not strain your patience!

With love and solidarity,