Women are climbing the highest mountains…

… this is the theme of the second World Women’s Conference (WWC) of grassroots’ women which will  take place in Kathmandu, Nepal from the 13th to the 18th of March in 2016. Women from at least 60 countries all around the world, are preparing for this big event.

Twenty years after the United Nation (UN) world women’s conference in Beijing  in 1995, the grassroots women say that the UN and the governments promised gender equality – but with the states’ continued implementation of  neoliberal policies nothing has change.  In reality, the political, social and cultural situation of the grassroots’ women have worsened with the impact of the wars of aggression and the devastating disaster caused by corporate aggression, fundamentalism, the decreasing wages, violence against women and the stress for women to take care of the family, the children and the growing population of the elderly.  We are determined to build a better future  women, towards the full emancipation of  the people of the world.

END_OF_DOCUMENT_TOKEN_TO_BE_REPLACED 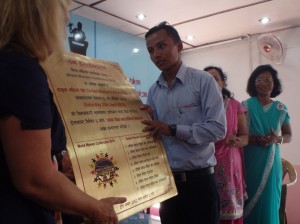 How are you? And hope you that you are well there. You may have surprise by having this unknown mail. As you know this is me Ruplal Moktan from Magapauwa Dolakha. Last time i had met you one of wonderful program-me that organized in Kathmandu at the Reports club. There was building construction handing over programme. i’m very much glad with you and all your member because we have got this memorable as well as good help from you which will help us to make our education better and will recover our wound that destroyed by earthquake.

END_OF_DOCUMENT_TOKEN_TO_BE_REPLACED

Today we would like to write you about the most important hot spots, which have arisen in Greece, the Ukraine, in the Middle East, in Rojava, Nepal and as a consequence of the refugee crisis as well as our preparation process of the World Women’s Conference and the special challenges for the women’s movement related with these hot spots.

In these countries women play an important role in the everyday struggle for democracy, for the people’s liberation, for the reconstruction of the country in Nepal and Rojava and against the fascist and extremely religious ISIS-forces in Syria and Northern Iraq.

The Greek people have sent a clear, courageous and militant signal against the Troika to the EU and world bank and there was enormous solidarity for the Greek people throughout Europe. Despite the immense media pressure against Greece, the people decided for a clear “No” against the enforced austerity measures. But now they shall pay the price and safe the banks nevertheless. We are really interested in how they will act and ensure our full support in fighting against the austerity measures in Europe.

END_OF_DOCUMENT_TOKEN_TO_BE_REPLACED

Answer from Shiela: Dear European coordinatiors, I express my heartfelt gratitude, on behalf of Nepalese masses. Your effort of solidarity definitely strengths the will power of women in the process of world women conference, to help the needy people who are ignored by the state. For sure once the situation gets stable we will give  the report. Though I am unable to build contact with other coordinators in Nepal, but I hope they are physically uninjured. Once more I would like to extend my thanks for your valueable contribution at very vulnerable situation, and hope for the same in future. In struggle, Shiela. ****       European Coordinators Monika, Halinka, Angélica, Maria 21-05-2015 To the Coordinators in Nepal CC to all World Coordinators Dear Durga, Sarita and Shiela, we are tremendously happy that we can transfer 20.020,22 €uro from Germany, the

Netherlands and France. What is special about these funds is, that they mainly come from many small-scale and micro donations. About 10,000 discussions were held for it, the women mainly collected on May Day also among workers. This included speaking about the World Women’s Conference and the important union of the 8 women’s organisations in Nepal. We emphasised that the 8 women’s organisations are not dependent on cooperation with the government, like the international charitiy organisations are, but have deep roots among the masses of the women. The women are of course curious to get to know at a later time how the money was used. Whenever you will have a clear head again to write about this, we are happy to get a report. But of course there is no hurry! END_OF_DOCUMENT_TOKEN_TO_BE_REPLACED

To all worldwomen in Europe!

We, Monika and Halinka are back from a very successful meeting in Nepal.

We are sending you all decisions and resolutions as well as some pictures enclosed, so that you may have an impression of the meeting yourselves.

The most important result is that the eight women’s organisations in Nepal work together very closely and have set course for the World Women’s Conference 2016 despite all the conflicts between their parties. In this spirit we decided upon the following resolutions (among others):

The 4th World Meeting of coordinators for the 2nd World Women’s Conference took place from the 10th till the 15th of March 2015 in Katmandu/Nepal. Together with the wonderful women of the eight women’s organizations (United Women’s Association) we make a call to all the women of the world:

Start NOW with the intensive preparation for the 2nd World Women’s Conference!

Take responsibility for the conference! END_OF_DOCUMENT_TOKEN_TO_BE_REPLACED

Women gathered in South Africa for the 2nd coordinators meeting preparing the 2nd World Women’s Conference 2016 want to express their solidarity with our comrade Mary Zamora, former UNE’s president (Union of Ecuadorian Educators) for her unjust and anti-democratic conviction of 8 years of prison due to the persecution of president Correa’s government to the real popular fighters.

2. Resolution on South African Mine Strikes

291.865 employees of mine industries in South Africa, Anglo-America Platinum, Kumba Iron Ore and Anglo-Ashanti, in strikes 40 workers were killed and 78 injured last year. That is ongoing strikes, demanding their wage increase and better conditions of work in all mine sectors. As women we express our solidarity with South African Workers.